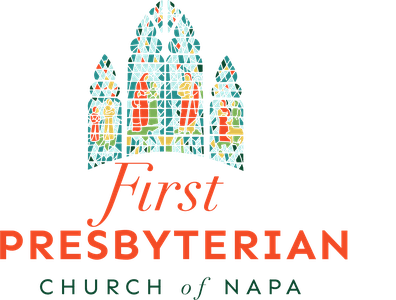 Growing in faith since 1853

First Presbyterian Church of Napa cares about one thing more than anything else, loving and serving Jesus Christ. We are a community of individuals who have found the love, hope, and joy in knowing Jesus, and simply want as many people as possible to experience the same.

First Presbyterian Church dates back to 1853. A small group of worshipers, who met weekly in the Napa County Courthouse, organized a "Society." By 1857, the Society had completed a comfortable house of worship on a 60 x 120 foot lot on Randolph Street; the lot was donated to the Society by Nathan Coombs.

Worship in the Randolph Street structure was a vast improvement over the environment of the Courthouse. Sparsely furnished, the congregation observed Communion by using a silver-plate set (two bread plates and two goblets) donated by Mr. W. S. Jacks. Mr. Jacks later donated a matching tankard and a baptismal font. There were no pews, but the congregation voted in 1858 to purchase a melodian to accompany the hymns. Hard, wooden benches might suffice, but music was an early priority.

In 1868, when the original site became too small for the growing church, the sanctuary was remodeled, making it longer and wider. At that time, the Rev. James Wylie and his son, Richard, donated a bell to the church. It cost $600 and carried a one-year warranty. In April of 1986, the original bell was rung 118 times, calling attention to its years of service. It still rings today!

Hardly a day goes by without a query regarding the history of the striking Gothic-style structure. Early records credit Napa architects Daley and Eisen with the design. The construction in 1874 was completed by J. W. Batchelor; exterior and interior painting was done by E. Schltis.

In 2014, the sanctuary and offices sustained damage from the Napa earthquake that occurred in the early morning hours of August of 2014. Over $1.6 M was raised and countless hours of a community of volunteers was committed to the campaign to help rebuild. Among the building improvements were an earthquake retrofit of the foundation, the entire facility repainted inside and out, the addition of air conditioning, and a large Welcome Center as you enter the Sanctuary. Throughout the reconstruction, the skills of numerous individuals contributed not only to the physical structure, but also to building us in a closer relationship to God and one another. On Sunday, July 10, 2016, a Rededication Celebration took place as we once again returned to worshipping in the historic sanctuary.

Self-guided tours are available! Stop by the church office for a visit.

Connect..... to God and each other

Be Transformed..... into followers of Christ

And as we move forward as a community of faith, inclusion and belonging remain at the center of who we are as followers of Christ.

What this means for you

What does this mean for you? Most importantly, you're always welcome at First Presbyterian Church of Napa. We're saving a seat for you. Wherever you're at in your faith journey, you'll always be accepted as part of the FPC Napa community.

Beyond that, if you're ready to plan your first visit, click here. If you'd simply like to get in touch with us to find out more, click the button below. 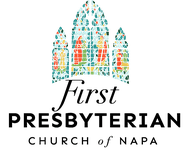